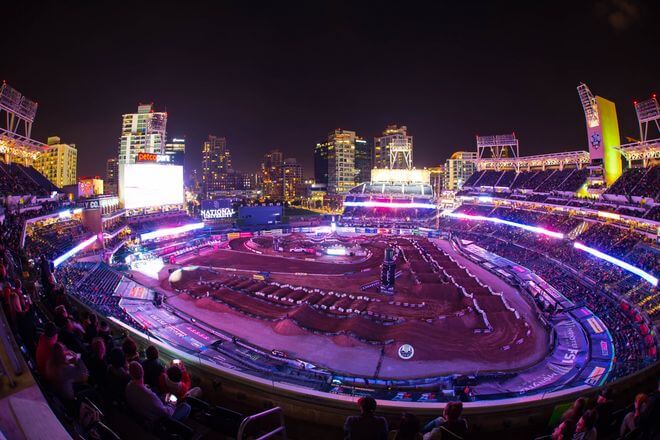 Tickets are finally available for the 2017 Monster Energy AMA Supercross, leaving fans pretty excited. The event, which is scheduled to take place next January, is one of the most anticipated off-road motorcycle championships in the sporting calendar, with thousands of fans set to flock to Angel Stadium in Anaheim, California, for the first event on January 7. Here’s what to expect and where you can buy tickets.

From Anaheim, the Monster Energy AMA Supercross hits San Diego before taking in Glendale, Oakland and Arlington, Texas. The tour will continue through several states before winding up at the Sam Boyd Stadium in Las Vegas, Nevada, on May 6. All the events are organized by Feld Entertainment.

For the first time ever, both Monster Energy Supercross and AMSOIL Arenacross will compete in the same city- at the same venue- on the same weekend- for a groundbreaking showcase of the world’s two premier stadium racing championships!

AMSOIL Arenacross will kick off on Friday, February 24, 2017, followed by Monster Energy Supercross’ final race inside the Georgia Dome on Saturday, February 25, 2017.

If next year’s event is anything like this year’s, expect the unexpected and lots of thrills along the way. Ryan Dungey will return to defend his back-to-back championship. But, there are plenty of competitors who are hot on his heels, making this one of the most exciting sporting events of 2017.

Where to Watch the 2017 Monster Energy Supercross?

Monster Energy Supercross might seem like a recent phenomenon but the competition stretches back more than 40 years ago. Today, it’s one of the biggest events in motorcycle racing, with millions of people watching the live games on TV and on the Internet every year.

For the 2017 event, viewers can see all the action on FOX Sports and FOX. Viewers can also watch on the FOX Sports Go app and the local media will be covering results and analysis from the events, live.

Tickets, which are available at SupercrossLive.com, are sure to sell out quick for the 2017 Monster Energy Supercross event. The championship kicks on January 6 in Anaheim, California, before traveling across various states. Book an event in a city near you and enjoy this visual extravaganza of motorcycles action!