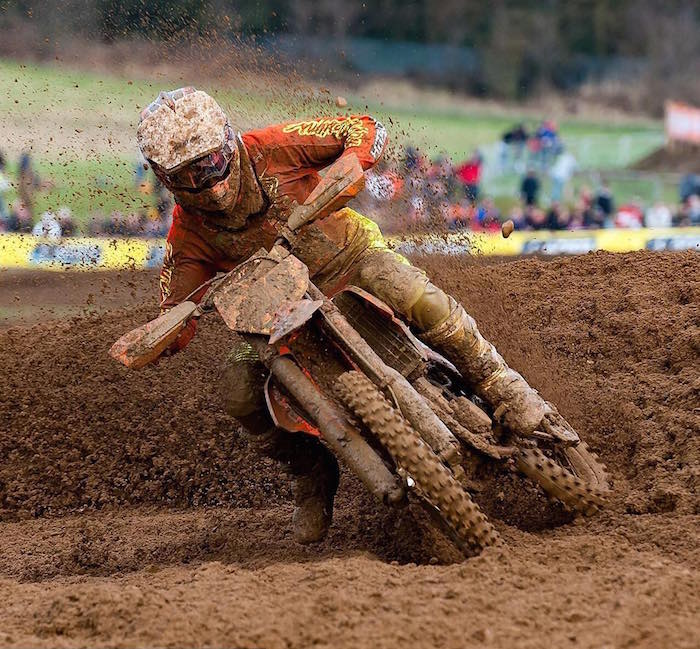 Beloved rider Jake Nicholls has announced his retirement from Motocross after a 10 year long career at the track. Since hitting the pro ranks a decade ago with MVR-D Suzuki, Jake has earned a reputation as one of the most hard-working riders in the sport and has made a mark on the British motocross scene.

However, the last few years of his career haven’t been easy as they have been equally divided between the track and the injury bench. From that freaky finger injury to back issues and a dislocated hip – Jake has had a bad run of luck. But along with affecting his physical health and career, these injuries have had an impact on his mental wellbeing too. In this open letter, Jake explains how he has found a new focus in life and still hopes to continue his motocross career as a UK-based rider. He hopes to capture the titles he has missed out on, in the past.

“As many of you know, I had a big set back in the middle of April, where without crashing I dislocated my hip. My mind was a mess at the time of the crash but once I was stabilized that evening, I said to my Mum who was at my bedside, that I’m done with racing GPs. 2017 is my tenth year racing the grand prix series, it’s been a rollercoaster at times but overall a great 10 years in my life. From the day I started racing I always dreamed and believed that one day I could be a world champion. The hardest part of this decision is giving up on that dream, something I’ve always prided myself on not doing.

A big part of my career was the move to Belgium, some people saw it as a sacrifice, leaving a nice home, family and a perfect practice track behind, I never saw it like that, it was a dream come true, living there for 3 years made me the racer and the person I am today. But after signing with a British team for 2014 I was determined to prove that I could be just as good if not better in GPs by living at home and practicing on one of the best tracks in the world at my parents house along with all the other professionally built private tracks in our area, rather than the subpar practice tracks in Belgium where you regularly have to share tracks with Quads, sidecars and 85cc, and deal with the fact that there is no marshals.

But I realized, these days you can’t be competitive in GPs unless you’re based in mainland Europe. And I’m not prepared to do that anymore, last season I enjoyed two-thirds of the season with the Hitachi Revo Husqvarna team and we had some good results after two years of injury. The last couple of races I fell out of love with the traveling and racing, I didn’t realize, I worked harder than ever this winter and I was feeling really good before the first GP, I enjoyed my preseason race at Hawkstone, but as soon as got to the first GP that some feeling hit me, no enjoyment and the risks being taken for a mere point. I was so lost in it, not knowing why I felt like this.

I went through the first four flyaway GPs having not rode very well and having even less fun, not enjoying the tracks and the traveling at all, it had caught up on me. I got to Trento, and my head was all over the place, I was taking big risks to get 21st in timed practice. I was so down on Saturday night, I cried over the phone to my wife not knowing what’s going on. Feeling like I was maybe putting too much pressure on myself I approached the Sunday with a different attitude, just wanting to ride well and enjoy it, forgetting about the results. Next minute I’m sat on the track with my leg facing the wrong way, thinking why!

I’ve become heavily involved in my fathers business since I’ve been injured which ultimately is my future and I’m excited about it. But I love racing so so much and I’m only 27. Right now I’m talking to some teams to race in GB only and concentrate on winning the British titles, which will also allow me to stay involved in the business during the week, and mainly to enjoy my racing again.

I leave with no regrets, I’m eternally grateful for all the experiences I’ve had, I have some great supporters around Europe and I thank them for always backing me.

Thank you dearly to all that have helped me on this 10-year journey!“