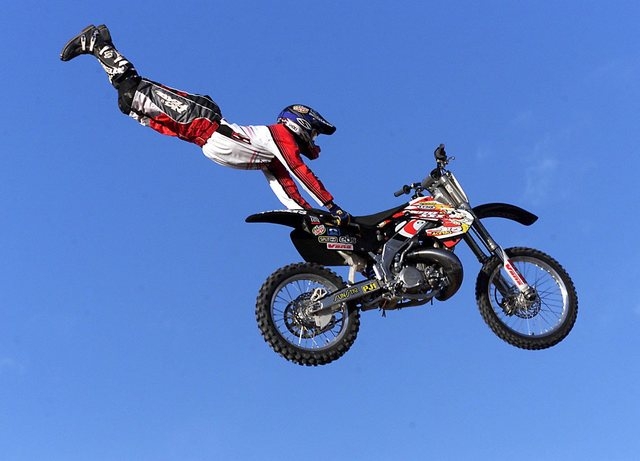 There are racer and then there are legends. The feats explained below are not only breathtaking, they’re also almost impossible to replicate. Some are life-threatening. Read on to find what they are.

1) Lap every rider in a single moto: Ricky Carmichael

The GOAT of motocross racing, Ricky Carmichael did the impossible in 2006. On a wet and muddy track and against strong competition like Chad Reed and James Stewart, Ricky lapped all the riders. Forget doing it again, no one has even come close to this feat. He did it again in 2007 when he lapped 39 riders on to what can be called as the single most dominated race in history.

James Stewart and Ricky Carmichael both have 49 Supercross wins but they’re 24 wins away from Jeremy’s 72. If Bubba and the GOAT could not do it, could be possible?

ooks like even this article is dominated by Ricky but that’s no surprise. Both James and Ricky have had a perfect motocross season winning all 24 races. Actually, Ricky has done it twice (2002 and 2005).

#repost from @fmf73 those reactions are priceless. Thanks everyone who reposted the video, it means a lot.

Jumps might seem easy, but they’re not. You need to be very precise while landing and the higher you jump, the more precise you need to be. In the video you see above, Rookie’s massive jump has spanned for more than 250 ft which is outstanding!

Him again. Seems like this record may never be broken as no rider has even come close to a 3-digit number. And even if they did, they’d still be one-thirds short of the record.

Yes, backflips have been performed by many riders today but it all started in 2000 when Carey Hart, famous for his signature trick “Hart Attack”, successfully attempted the backflip. Back then, it was the ‘holy grail’ of motocross and only BMX riders did it. After Hart, almost everyone began doing it. Travis, being the superhuman that he is, did a double backflip in 2006. This year, Aussie Josh Sheehan did the unthinkable and successfully pulled off a “triple backflip”. A “quad backflip” doesn’t seem too far away. Watch Hart pull off the first backflip in the video below.