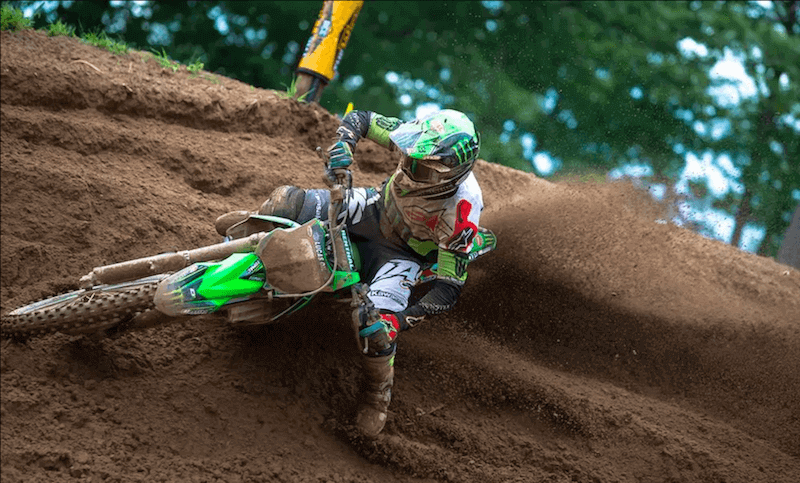 Round 7 of the 2017 Lucas Oil Pro Motocross Championship, sanctioned by AMA Pro Racing was one of the most challenging rounds of the on-going championship! With just 5 more rounds to go, Round 7 held at the Southwick National track surely turned up the heat a notch. Being one of the most physically demanding tracks till date at the championship, it put the riders and their gear to test.

Points leader Eli Tomac continued his winning streak into Round 7 by securing the top position in the 450 Class! He put Monster Energy Kawasaki on top of the podium a third time in a row, and the fourth time in the entire competition – thus strengthening his position a great deal. Talking about his hot winning streak, Eli Tomac said –

“We only have one really good sand track of the year and that is here at Southwick. It seems most guys either love or hate this track, but I’m a big fan of it and enjoy coming here. I think we’re in a good spot points wise. We’re not really fighting anything on the motorcycle and it’s nice to head into the off weekend on a good note.”

In the 250 Class too, Zach Osborne continued his winning streak and put Rockstar Energy Husqvarna Factory Racing on top of the score board!

An excited Osborne said, “It was another good day for me and I’m happy to finish on a strong note heading into the break. I caught a little bit of a break having Dylan [Ferrandis] as the guy up there battling with me. If it had been anyone else who is closer in points, I might have felt forced to push the issue a little bit more, especially in the first moto. The track was definitely deeper than last year, I thought it was really good and it got really whooped out today.”

In related news, rider Jason Anderson sat out the 2017 Southwick Motocross race due to practice injuries sustained earlier that week on Thursday. He took to his social media accounts to break the news to his fans and promised to be back for Round 8 at Melville Reportedly he sustained some internal injuries which hindered his performance. Before the race,Anderson attempted to ride the first practice at the sand track and logged a lap time that was 42-seconds off the leader’s pace. Wishing you a speedy recovering Anderson!

Previously, Red Bull KTM’s Trey Canard too announced that he would be giving the Southwick National track a miss owning to a minor practice injury earlier in the week. Canard has particularly had a bad racing season this year, due to several falls and riding injuries which have led him to sit out most of the 2017 Lucas Oil Pro Motocross Championship. Hoping to catch him at Round 8 in Melville on July 22, 2017!